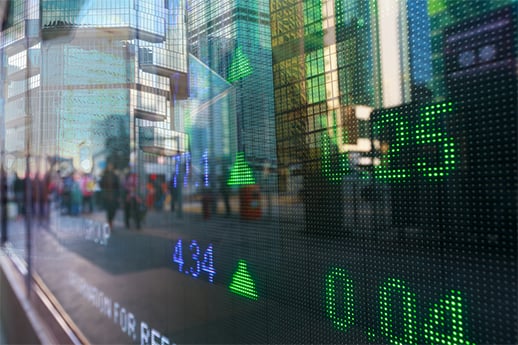 Despite the best efforts of diplomats from around the world, the Ukrainian crisis continues to escalate. The direct implications for European and global real estate markets appear limited in the first instance, but the economic impact could ultimately be significant. The likely impact on inflation makes the job of central bankers in navigating the right path for interest rates even harder. Much will depend on the scale of the sanctions imposed, but further volatility in financial and energy markets is to be expected.

On 21 February, Russian President Vladimir Putin announced that Moscow had “recognized” two regions of Ukraine that were under the control of Russian-backed separatists as independent states. Russian troops have crossed the border into these states, Donetsk and Luhansk, a move that has been widely condemned by international governments, who have been promising that any such moves would be met with severe economic and political sanctions. Details of the sanctions are expected to be announced over the course of the next few days.

What this means for the economy

Increased volatility in equity markets over the last week was partly due to rising political tensions with Russia. Stock markets will remain susceptible to fears of escalation into a wider conflict, but we continue to believe that an all-out war is highly unlikely. Key to investor sentiment will be the extent of the sanctions imposed.

The main risks come from the effect of sanctions on global commodity prices, particularly oil products, natural gas and wheat, as these are Russia’s primary exports. As a key importer of Russian gas, Germany has already announced suspension of the Nord Stream 2 pipeline project which was shortly due to start shipping gas to Europe’s largest economy.

Energy costs, and to some extent food, have been a key factor underlying the recent surge in global inflation and have been driven higher in recent days by concerns over the prospect of sanctions on Russian exports. Whilst a complete ban appears very unlikely, oil and gas prices have already reacted to the escalation and further price rises are expected. 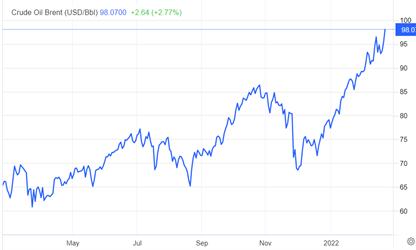 Elsewhere, Russia is a major importer of vehicles and vehicle components, communications technology and medical pharmaceuticals. Trading restrictions will mainly impact the European Union (particularly Germany, The Netherlands and Italy), which is responsible for around a third of Russia’s cross-border business, as well as the United States. China is also a major trading partner with Russia, but the two countries have close political ties, and it is unlikely that China would participate meaningfully, if at all, in any international sanctions regime. 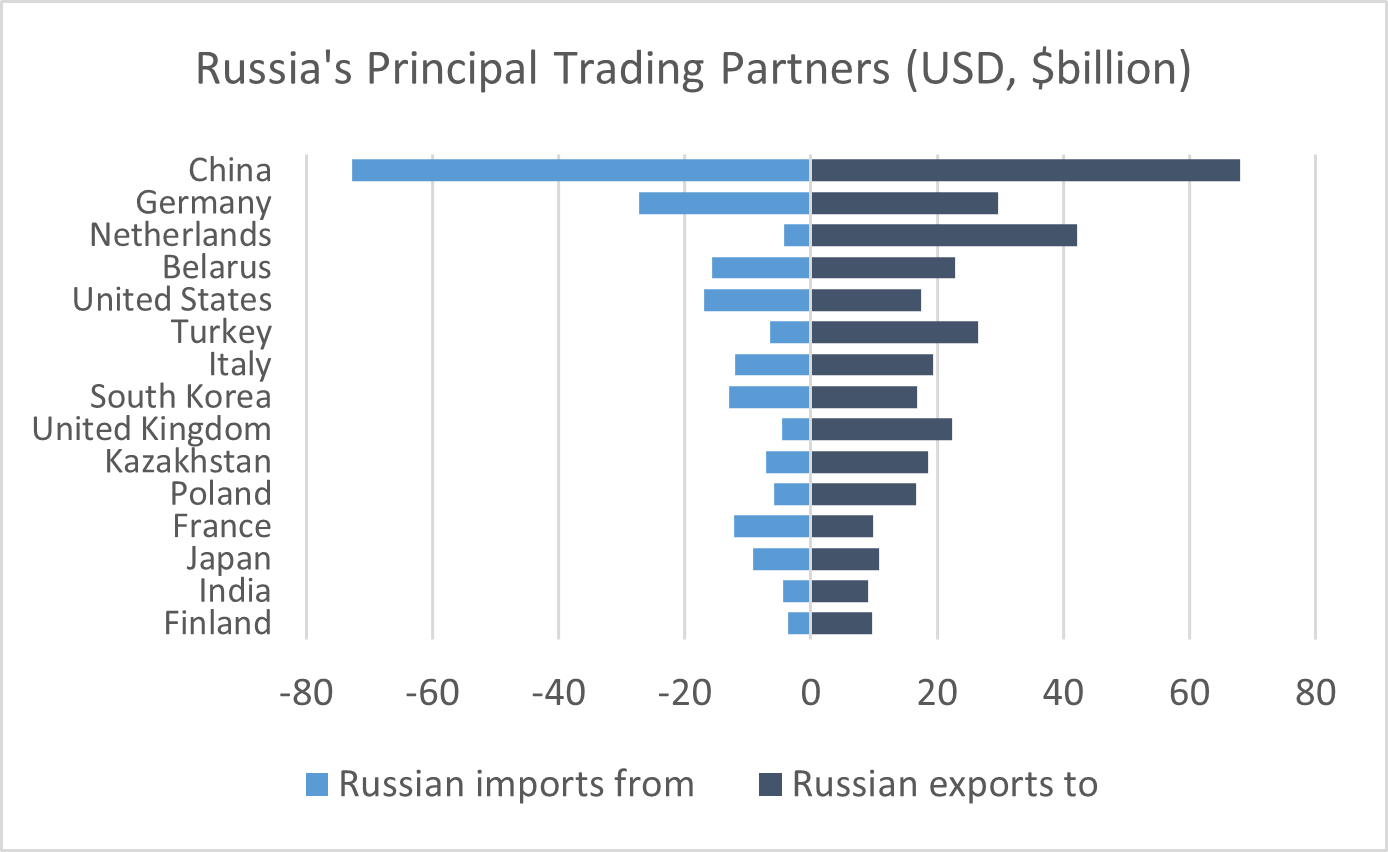 The direct economic impact of trade restrictions is likely to be minimal for most countries, with Oxford Economics suggesting a 0.3% hit to Eurozone GDP this year.  However, the majority of this impact will come from the additional inflationary pressure from oil and gas. Households already under pressure from rising prices will reduce their expenditure, particularly in countries such as Italy, The Netherlands, Spain and Germany that are highly dependent on imported energy.

This poses a real dilemma for central bankers already facing a challenging job of navigating opposing obstacles to stability, particularly in the UK and Eurozone. On the one hand they are under pressure to reduce inflation and this unwelcome price shock will add further fuel to calls for them to take action, despite the fact that they would normally ignore volatile energy costs when determining interest rate policy. Equally, the negative impact of higher prices on consumer expenditure will raise concerns of further economic weakness which will make policymakers more cautious about raising rates.

Given the modest direct economic repercussions expected, there are two main channels through which the crisis may impact the commercial real estate sector.

With the exception of a large student housing deal in the UK in 2015, Russian cross-border investment has been minimal in the last decade. Only Germany has seen more than a few isolated transactions each year, and even here the volumes are inconsequential. If anything, Russian buyers have been more evident in the prime residential markets of London, Paris and a few other European capitals than in the commercial sector. 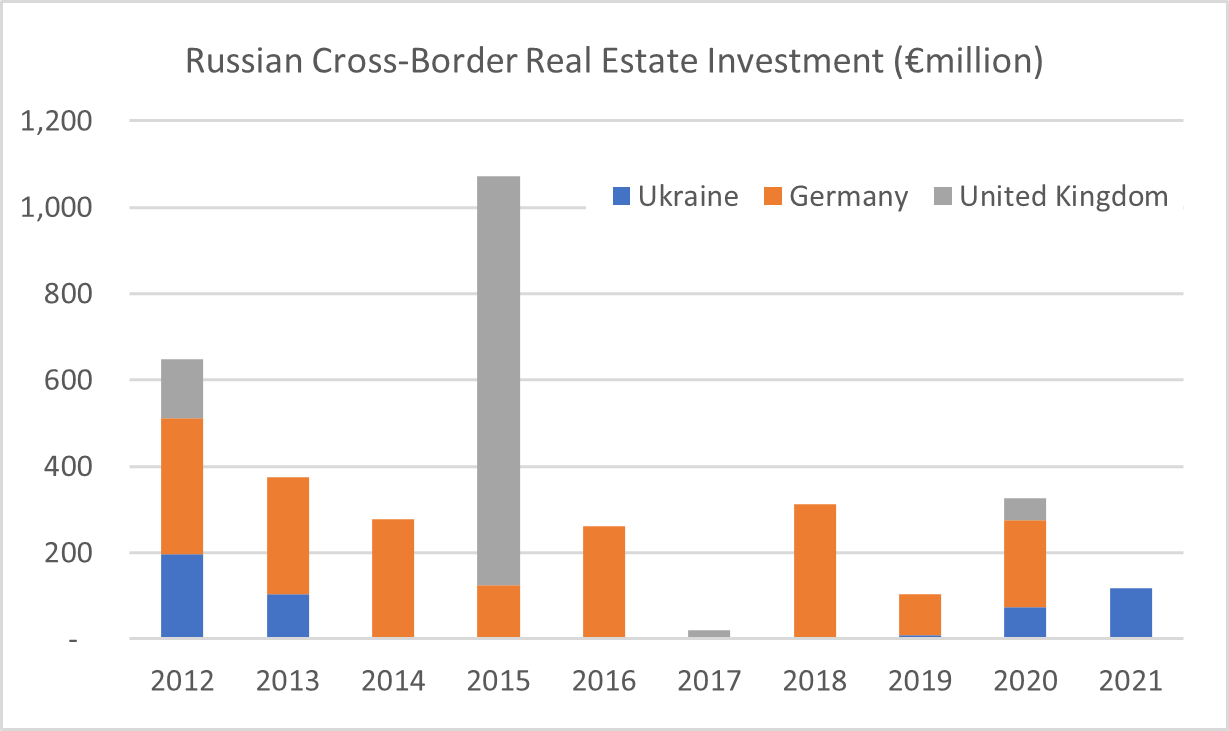 We believe that central banks will largely look through this new price shock and on balance will be more hesitant about raising interest rates in an environment of heightened consumer weakness and uncertainty.

If tensions escalate further, one would expect investors to head back towards safe-haven investments including government bonds (particularly U.S. Treasuries). This would push down benchmark bond yields that were generally expected to rise during 2023, alleviating potential pressure on real estate pricing. However, government bond yields actually rose in early trading after the incursion, suggesting investors are currently more worried about inflation than a broadening of the conflict.

On balance we expect the crisis to create an air of caution which will tend to slow the pace of interest rate rises until it is clear the economic fallout has been contained. But it will be a difficult decision which needs to take into account the myriad of factors influencing the inflationary outlook – a subject on which we will be publishing further research next week.

Nick Axford is our Global Director of Insight, based in London.